This avant garde artist competed and won in the R&B Soul category.

Could a group or person from Baltimore, ride the same shock wave to stardom? We keep trying. So, in the summer of 2018, the Baltimore Office of Promotion and The Arts, linked up with the Hard Rock Cafe to hold a Sound Off.  Musical Artists of different persuasions were invited to demonstrate their unique talents.

Quite an ideal setting with Hard Rock located in the Inner Harbor, visitors to Baltimore, and us residents intoxicating ourselves with food and beverages while entertained, via live performances, with bay breezes adding to the atmospherics.

This event ran for a week, and like buying a car, each act was categorized, “hence best in class”; but in the end there will be only one overall winner.

This month, November 2018, I got word that the overall winner, is PBC (Pitches Be Crazy). Comedians can have fun with that first word. They are a multi-racial five piece band that does rock, R&B, Rap, Funk, and top 40 hits of the past 40 years. I had a conversation:

PITCHES BE CRAZY, of Baltimore Maryland.

ROC WRITAH, represented the Hip Hop generation among us.

THE other ADAMS FAMILY

Who’s calling who, a “pimp”? Yep, they all are trying to get paid. Pimping is not only for “hustlers”  “Eh!”

Those first 30 years of life; many of us squandered them. We drank, smoked, partied, engaged in the blood, sweat and tears movements. Not giving a “care” to what goes in our bodies, seeking happiness and having fun. We were like the equestrians, very cavalier, “hip”.

For many that lifestyle later hit speed bumps, i.e. cancer, stroke, diabetes. Hopes were dashed. However, some rose like phoenixes from such desserts, and began looking forward to the next 30 years.

African Americas (blacks) have the highest death rate of any racial or ethnic group in the United States, when it comes to cancers.

Mondawmin Mall in Baltimore Md., is surrounded primarily by black neighborhoods of Druid Hill, Whitelock, Lower Park Heights, and a major subway station. It was the appropriate venue to showcase how one can look after a bout with the BIG “C”.

Thanksgiving in some households, is tantamount to homecoming . Yes, it can feel like  being 30, again!

Most events where there’s a duo, the combo is usually vocalist and guitar, drummer and guitarist, with either one subbing as a vocalist. However, what if you were asked to attend a performance of a cellist and a flutist, and no singing. My curiosity factor jumped sky high.

The other factor would be, where would such a performance be held? Someone’s wedding? Graduation? Executive promotion?

How about An de Music, downtown Baltimore Md.

I arrived to hear cellist BEN LARSEN and flutist MARTHA CARGO, with Ms. Cargo at times playing an instrument I have not heard of or seen before, the bass flute. 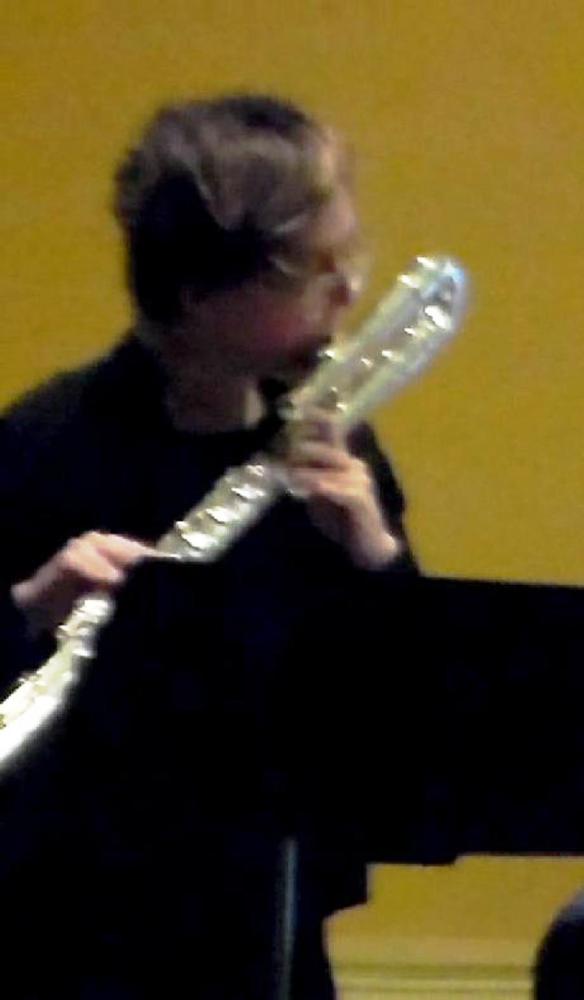 The people of India, are known musically for their tablas and sitars  Writing an Indian classical piece for cello and flute? A daring undertaking when Rena wrote NADIA:

Ben and Martha later demonstrating more of  their skill sets:

An die Musik is located at 409 N. Charles Street, in Baltimore Md.

It is the kind of request normally heard in the bellies of the beasts all around the world, i.e. the inner cities. Why? Because a regular chicken fried rice order,  never has enough chicken, “more rice than anything”. Penny candy, loose cigarettes, food stamps in exchange for money. “Smokes”; “something to make it hard”.

If any of the above is alien to your life experience, you’ve never had a Chinese friend, or paid a visit to Chinatown in any part of the world.

Baltimore never really had a Chinatown. We have had, and still do, The Ghetto, and “Pigtown”. The developers of Horshoe Casino, kicked that town through the uprights, similar to what happened to the town of Babel when God confused the language; Nimrod had no army, for the phenomenon forced men to be like “crabs in a barrel”.

But back to the Chinese. What would happen if the Chinatowns throughout the United States began crumbling, as though hit by a series of earthquakes?

It is the same question playwright, LAUREN YEE  asked. Chinese settlers in the United States, sent their children to American schools, many of them did not want to learn the language, did not want to run grocery stores, did not want to live behind, or above their parents stores; and when it came to having children! That may be put on hold. And then there’s INTEGRATION! Ever heard of Connie Chung, a one time famous television broadcaster! Chinese girls found here inspiring, and went Hollywood: lengthen the hair, change the shape of the eyes, more indentation to give the face a less rounded look. Pow! They did not have to marry chinese. But just travel to Jamaica, chinese and black babies abound! Byron Lee was a famous reggae artist,  (Ripley’s Believe it or Not?)

The Chinese like the Italians brought their questionable money generating activities to the United States, and like the “Mob”, flourished until they found out that America is known for cowboys who do not round up horses and cattle, but criminals. This group of cowboys carry guns, badges and warrants, a.k.a. the Federal Bureau of Investigation.

Cannot tell you more, see the play, KING OF THE YEES, at Center Stage Baltimore, through November 18th, 2018.

CELESTE DEN and JOE NGO, are unendingly brilliant. TONY AIDAN VO as a gay man had me fooled.

My chicken fried rice “was good” (a bow from the neck up, and not from the waist, as that would be Japanese). It had extra chicken without me asking. Did not take the soy sauce, chose another option. 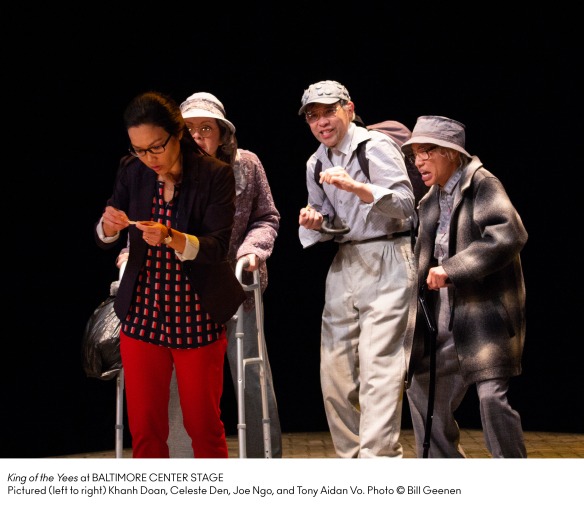