What happens when a city that was once the Cadillac of American cities files bankruptcy? The downward spiral is speedy, and almost devastating.

Detroit! It all started in 1973 with the Arab Oil Embargo. Cars had to be downsized. The spaceship size cars, that looked like houses on wheels, (BUICK 225, PONTIAC, LINCOLN) were becoming more expensive to fuel. Who were the ones making cars with better fuel efficiency? The Japanese.

As Detroit downsized, whites took flight, retooled themselves for other jobs, but blacks had no such choice. As a result of the white flight, Detroit became an almost completely black city, as this population scrambled for the remaining jobs in the automobile plants. What was left could easily be described as the SKELETON CREW running the automobile industry.

In the play STEPHANIE BERRY (Faye) who works on the assembly line is having financial difficulty. She owns a house, has a car, has a rocky relationship with her son, has no male companion, and is trying to keep all the mishaps from her co-workers.

There are rumblings of plant closings, and new employee conduct rules, including the cessation of smoking. Faye as a Union representative should be setting an example. Everyone is black including the immediate supervisor, who has to be the enforcer. (Remember history? The Field N….r vs. the House N….r?).

Faye loses her house, and began sneaking into the plant to sleep at night. Will she be discovered, and be fired?

Do you know of anyone who has faced similar circumstances? Working, black, yet homeless. This play could be timely in more than one way. 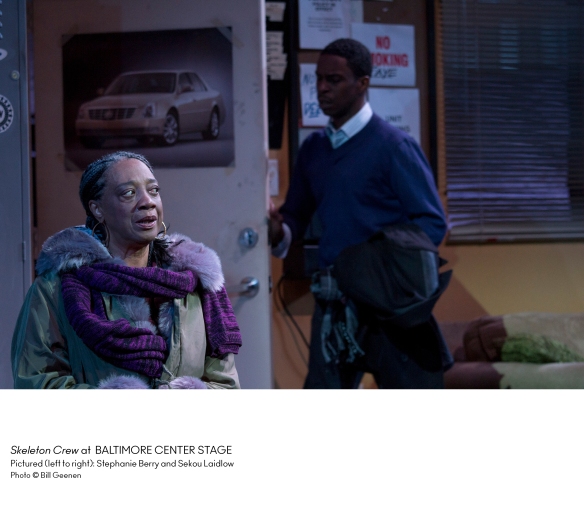