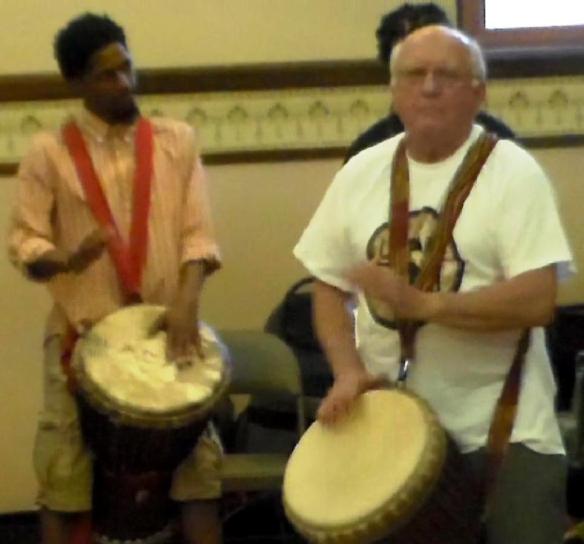 In the footsteps, youth drummer.

The T-Shirt, to mark the way to the future.

Female drummers, in support of the effort.

Every once in a blue moon, comes an eclipse, and in the African American Diaspora, centered in the United States, this is palpable: Mohammed Ali, Martin Luther King Jr. Barak Obama, even Don King.

Someone who may soon join the list of phenomena, could be MENES YAHUDAH, who formed a group around his talent, drumming. He has just launched a nonprofit organization, named DJEMBE ORCHESTRA and PERFORMING ARTS COMPANY. In his words “students are exposed to musical history, black artistry, a wide range of educational activities, including math, geography, leadership training, social activism, and personal responsibility”.

What MENES is trying to do, is create another path for the migration of youth, especially the socially economic disadvantaged, to latch to his waist, and duplicate his legs and hands as they march and beat the tablets to a promise land, far from the ghetto.

The public was invited to see an example of his work this summer, in the heart of  the growing Baltimore Arts District. HERE’S TO MENES AND THOSE WHO SHARE HIS DREAM!!!